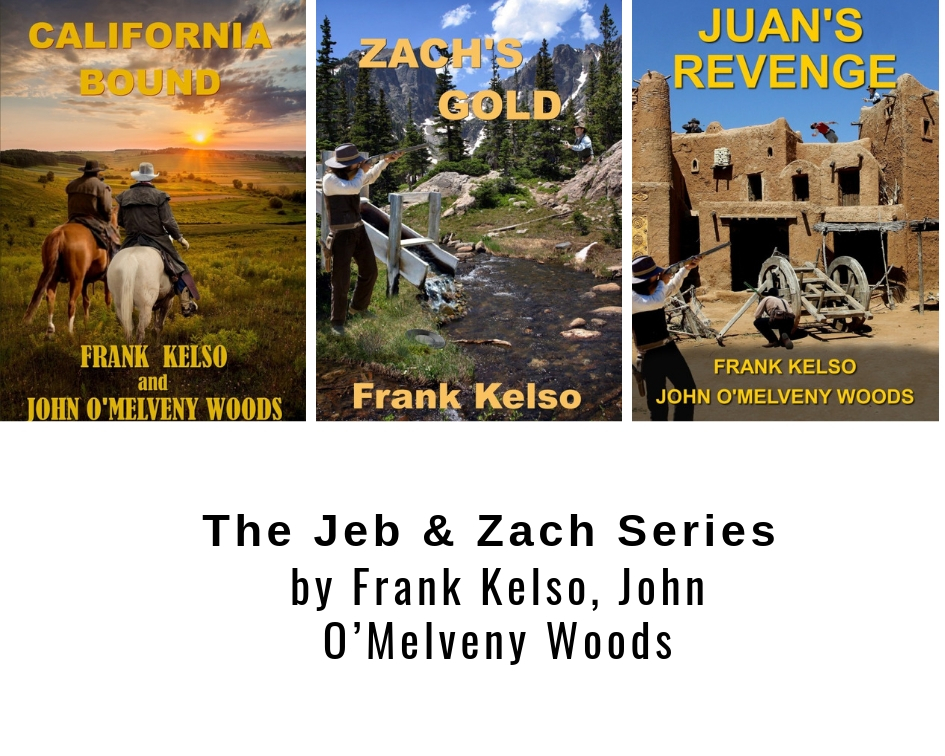 Written with enthusiasm and verve, this series is highly entertaining and a definite hit…

In the wild, action-filled first book of the series, civil veterans Jeb and Zach make a heroic journey across Rio Grande border to free Becky, Jeb’s niece, from border raiders. Kelso and Woods write with great panache and style, bringing the western landscape of the era alive in California Bound. They are funny and poignant at once but spare little detail while describing violent action. Zach and Jeb are classic American heroes: witty, brave, and highly resourceful: they slug their way through dangerous situations with style and flamboyance and hold readers’ imagination well—taking the reader on a gritty journey along fading country roads, scattered towns, and across the border. The villains are typical western villains: cattle rustling, horse stealing, cold-blooded rowdy men with a mean streak of male chauvinism. The second book, Zach’s Gold is Zach’s exploratory journey into the pristine Colorado mountains in search of gold, and it pits him against a gang of rowdy claim jumpers. Cowboys, miners, claim jumpers are heroes here, and the story is packed with a solid punch of action and a healthy dose of violence. Zach is a darling: the gunslinging cowboy is fast with his fist, guns, and wits as usual, but he possesses a good business head on his shoulders as well. The book lacks the flamboyance of the earlier book in the series but still a solid read. In Juan’s Revenge, the duo’s valour is tested once again as they fight the vengeful attack of Miguel Cortiña, the elder brother of the border raider who got killed after kidnapping Jeb’s niece in the first book in the series. Kalso and Woods bring the same flamboyance and flair to this compelling adventure that has made the first book in the series highly entertaining. Most of the characters from California Bound make a pleasant comeback in this third installment. There’s a dash of romance and unforeseen tragedy, and in the character of Becky readers witness a fiery heroine. Kalso and Woods have an expert eye for witty dialogues, humorous asides, and write tense scenes of action. A greatly enjoyable series that fans of the western will devour in no time.