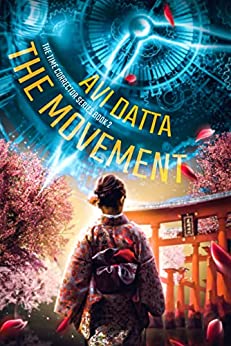 Unsettling alternate realities and hard SF elements abound in this latest installment in Datta’s near-future Time Corrector Series. Emika Amari, Vincent’s former lover, has kept herself away from the scientific genius. She has a young daughter Nozomi and her boyfriend Markus is helping her raise the little girl in London. When a forthcoming cutting-edge AI conference threatens to bring her face to face with Vincent, Emika realizes she is eager for the face-off despite her previous inhibitions. When they finally meet, Vincent barely recognizes her, owing to his partial amnesia. Determined to find the truth behind Vincent’s condition, Enika begins to look into the matter. Meanwhile, a new sinister enemy, Vandal, makes his entry in Vincent’s life, bringing chaos in his wake. As Vincent comes face to face with Vandal, he unravels shocking secrets from his own past that reshaped his reality as he knew it. With alternate realities colliding, Vincent must realize the true potential of his time-correction powers. In this dense middle installment, Datta’s imaginative exploration of the scientific speculations is an obvious plus point. They include the concept of the future and the past co-occurring in the Universe and what happens if there’s a device to initiate and control such a process. The reality-alternating worlds that he creates are thoroughly fascinating, but the real power here is in how Datta handles the utterly intricate structure of the plot, which includes the multiple storylines alternating between different timelines and several characters’ first-person perspectives. Now with so many fluctuating parts, the story isn’t straightforward, complicated in parts by heavy use of speculative concepts that often result in further intricacies. Yet there is a horde of exciting developments that keep readers on the edge. Datta’s prose is crisp and textured: his depiction of mythology and hard SF and cyberpunk elements is as compelling as his headlong dive into the characters’ emotions. Vincent’s quest to protect Akane from Vandal gives him the chance to move past his haunting dreams and jump headfirst into what ultimately becomes a life-and-death situation for humanity. Emika, with her elusiveness makes for an intriguing protagonist. Akane, Anna, Chris, Ravi, Philip, and Vandal, all have compelling story arcs that make readers thoroughly invested in them. This expansive but sometimes challenging SF tale offers mind-boggling scientific theories with deeply developed and emotionally captivating characters.