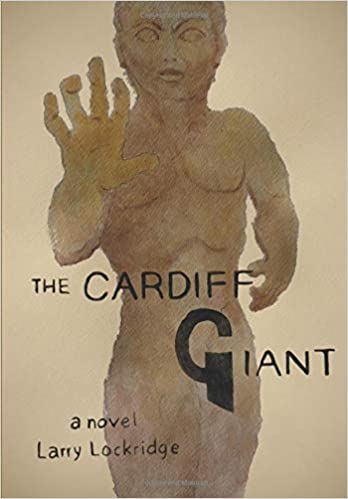 A fine, fantastic mess of a story that commands attention from start to finish for its originality and narrative dazzle…

Lockridge wields history, folklore, SF, and an eviscerating sarcasm to potent effect in his latest novel, a frothy blend of wit and absurd. Jack Thrasher, a reporter for the Discovery Channel, arrives in Cooperstown, New York to look into the sudden disappearance of the Cardiff Giant, 10-foot-tall artifact of petrified gypsum shaped in human form, from the Farmers’ Museum. Everyone, including locals and outsiders have a theory about the figure’s disappearance, but unearthing the truth will lead to shocking revelations. Fiction and outright eccentricity collide in a delightfully inventive yarn. Cooperstown, home of many gothic castles, the Baseball Hall of Fame, and the Glimmerglass Opera is the setting for the story. It’s a town with a colorful history— mysterious, weird, full of jazzy stories. Bits about people’s religious and paranormal belief and passion for baseball, opera, and cable TV programming abound. Even though the figure’s disappearance indicates some weird conspiracy, no one could have dreamed up the complications arising from Jack’s arrival in the town and the calamities that follow. One frantic situation leads to another, and delightful subplots multiply as the peppy narrative follows the interconnecting adventures of Jack, the sharp yet thoughtful guy who seems prone to weirdest mishaps, the irresistible Thor; Esther and Sheila, the quirky siblings; the ever-watchful Barry; sardonic townsfolk; and, unsurprisingly, the members of the passionate Local Alien Abduction Focus group—who attempt a night raid on aliens. The humor gets wild as the narrative progresses forward, but the story never loses its buoyancy thanks to Lockridge’s deftly drawn characters and keen psychological insight. His twisting plotting is perfectly fine-tuned, making all the outlandish complications that arise from various situations fit right into Jack and others’ eccentric world.  While the strings of calamitous events Jack and others repeatedly get pulled into goes on a bit too long, that doesn’t diminish the pleasure of Jack’s developing relationship with others, particularly with Sheila. Humorous, sharp dialogue and long-winded exploits will keep pages turning till the satisfying close. Marcia Scanlon’s vividly drawn, delightful illustrations serve as a quick, amusing snapshot of the story. Lockridge’s intelligent, assured writing and his penchant for the bizarre are all on full display in this, a read that will appeal to lovers of solid literary fiction.