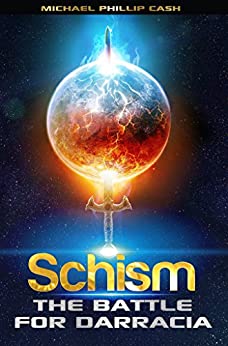 The first volume in Cash’s The Battle for Darracia trilogy is set centuries into a future shaped by violence, bloodshed, and pride, where varied alien races are threatened by an ever-widening social gap between its populations. Class and race are causing turmoil that’s tearing at the once peaceful world of the planet Darracia, one of the fourteen in the alien solar system. Part Darracian, part Planta, nineteen-year-old Price V’sair is struggling with his identity, longing to become a fierce warrior to prove himself to his people. But when a sinister conspiracy upturns the power hierarchy of the kingdom, V’sair knows he must harness the power of the elusive Fireblade if he wants to bring peace to his fractured kingdom. V’sair’s intuition and sensitivity make him the perfect guide to Cash’s immersive, meticulously depicted world. Cash leavens many bleak scenarios with empathy, understanding, and hope. The heavy emphasis on emotion and character has no consequences on the novel’s pacing or momentum, which remains steady throughout. But the ending seems rushed, particularly the parts about V’sair’s and Tulani’s individual coming-of-age journeys as they realize their roles in the bigger scheme of things. That said, Cash’s inventive take on an alien planet in the middle of chaos, as well as his excellent mixture of romance, fantastical magic, and SF to explore identity, survival, instinct, duty, integrity, and emotional bonding is more than enough to fuel this series opener. This genre mash-up of hard SF and high fantasy, is a winner.

(The Battle for Darracia #1)