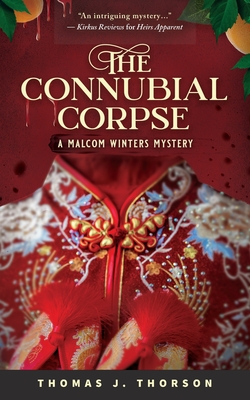 Thorson’s latest, featuring the reluctant sleuth Malcom Winters is a taut and suspenseful page-turner that offers plenty of intrigue and murder. When Vinn’s one of the best international students from China, Lily Cheng, doesn’t show up for her classes, Vinn is deeply concerned. Malcom and Vinn begin to look into Lily’s disappearance, but they have nothing concrete to go until the body of another young Asian woman, dressed in traditional Chinese wedding garb with her face immaculately made up, is found in a shipping crate heading overseas. The pair’s frantic search for Lily leads them to Chicago’s Chinatown. The stakes rise after another body is found. Unraveling answers lead the increasingly unsettled Malcom and Vinn into deep waters. With the help of Rebecca, Leo, the endearing detective London Jenkins, and a posse of eccentric misfits, the sleuthing pair must uncover the mystery of girls’ brutal murder before it gets too late. Thorson does a good job building pacing and suspense through the interactions of his characters—Malcom, Vinn and their close-knit friends, witnesses, the members of the Asian community from Chinatown—all of whom are portrayed in striking detail. He is excellent when it comes to crafting a clever and suspenseful plot while bringing the reader inside the heads of his characters. The deeply and sympathetically plumbed sleuth pair of Vinn and Malcom is an absolute winner. Their enduring friendship which constantly teeters on the edge of a romantic entanglement makes them a delight to watch. Jenkins, Rebecca, and Leo are a total hoot. Thorson excels at playing with reader expectations and in formulating plausible, shocking twists, but some readers may find the novel’s theme of the age-old superstitions casually playing havoc on people’s lives deeply unsettling. He intricately blends the centuries-old traditional history of China into the suspenseful narrative as Malcom and Vinn investigate further, realizing that not everything is as simple as it appears on the surface. China as a country of contradictions remains a concept, with none of the character ever setting foot there, but Thorson brings it fully alive in readers’ minds. He capably uses every device in the book from red herrings to blind alleys, from understated twists to instant shocks, keeping readers glued to pages.  This intricately plotted foray into the violent world of murder, intrigue, and superstitions is sure to wow the fans of finely constructed mysteries. Thorson remains an author to watch.