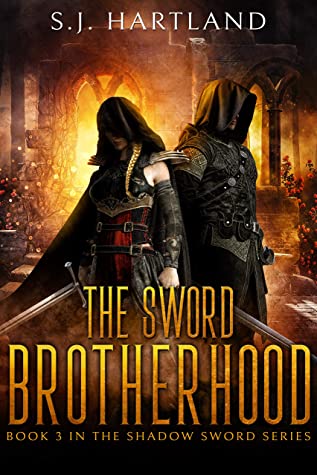 In this sprawling third volume of the epic Shadow Sword series, Hartland offers a spectacular fantasy world and larger-than-life characters as centuries-old rivalry continues to threaten the kingdom. Betrayed by a friend, Roaran Caelan, the dread lord and the seer king, is in the clutches of the evil God Archanon and his bloodthirsty ghoul-army. A decade of torture has worn down the once powerful king. The Sword Brotherhood of ancient warriors come together to rescue Roaran, but to do that they must enlist the help of Genya, a mighty sorceress destined for great things. But defeating the evil is not so easy, especially when humanity’s only hope is lured to the dark side. The novel features a plethora of heroes and villains, secrets and conspiracies, and powers and politics, and the meticulously detailed worldbuilding imparts a hefty dose of intrigue and mystery. The intricately crafted plot is rife with revenge, brotherhood, betrayal, and bloodshed, and Hartland’s sharp observations and keen understanding of the human psyche add to the depth. Shifting between various timelines, the narrative serves up finely rendered, fascinating character arc for various characters, especially Roark and Raggamirron. Hartland beautifully explores her characters’ struggles as they grapple with their inner turmoil, fears, rage, guilt, and regrets. The large cast may daunt new readers, but the expertly infused backstories help fill the gaps. Hartland has created a truly special combination of spectacularly crafted fantasy world, expressive prose, and intrigue. This is the best entry so far in the endlessly fascinating epic fantasy series.