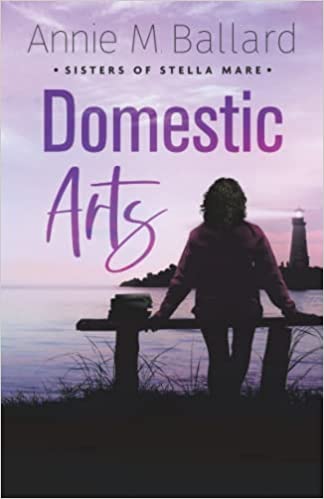 A layered and nuanced literary tale…

An expected betrayal forces a struggling artist to confront the opportunistic relationship that defines her romantic past in Ballard’s poignant latest installment in the Sisters of Stella Mare. Evie is back in Stella Mare with nothing but agonizing pain. Trying to get over Jase’s betrayal, she throws herself into her new project; clearing out her childhood home after her father’s decision to live in an assisted facility. When she finds an ancient rug and her great-aunt’s diary in the attic, she becomes enraptured with her discovery. On sabbatical from his university in the southern US, the endearing Stephen is a local novelty, helping his friend Leonard in the art gallery. When he meets Evie, the spark flies immediately. But Evie is wary of the new relationship. It’s easy to become fully immersed in the story: Ballard’s attention to detail yields an extraordinarily rich picture of Stella Mare’s small-town culture. Her characterization is deft as she portrays Evie and Leonie’s struggles to come out of their dilemmas. Shaped by the extraordinary betrayal, Evie makes for a credibly realized heroine. She’s vulnerable yet resilient, and the secondary cast is equally compelling, be it humans or four-legged furry friends. Alternating between the third-person omniscient voices shifting between Evie’s and Stephen’s stories and Hannah’s journal entries, the narration is remarkably smooth, immersing readers in the characters’ inner world. Ballard weaves Evie’s great-grandmother and great-aunt’s backstories together with Evie’s ongoing turmoil, as she struggles to determine whether her decade-long relationship with Jase was, in fact, an opportunistic association on the latter’s part. Evie’s blind hope despite Jase’s obvious disregard of her feelings becomes frustrating at times. Readers will hold their breaths for Evie to realize her potential and cheer for her when finally, she takes a stand for herself. Ballard ably handles the tightly constructed plot, infusing new life into the well-used plot device of intricacies of familial and romantic relationships. As the story progresses, readers realize that the story is much more than one woman’s journey to comprehending her own self-worth; it is a well-crafted mixture of exploration of life with in-depth examination of how domestic art has served as a vital platform for women to express their views about their identity and rights through the ages. Throughout, Ballard weaves in themes of pain, self-discovery, identity, female empowerment, and the ways a partner’s betrayal goes beyond feeling hurt and angry, impacting a person’s self-worth. Poignant and thoroughly absorbing.