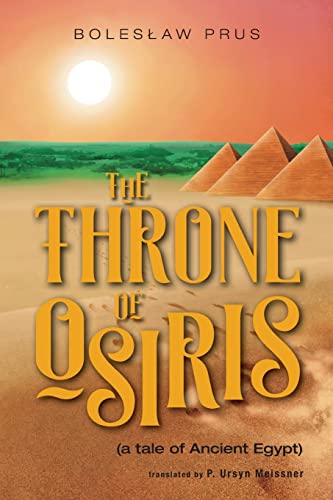 Descriptive and highly readable… A rousing tale of tumult in ancient Egypt.

Meissner’s translation of Bolesław Prus’s tale of ancient Egypt takes readers on a young prince’s journey to the throne. Egypt, circa 1100 BCE. Egypt’s priesthood has taken over Pharaoh’s rule and the justice system is broken. Tired of living in extreme poverty, the masses are ripe for revolt. Ambitious and headstrong, twenty-two-year-old Crown Prince Ramses is keen to take his place in the line of rulers and work for the greater good of the masses. But with the High Council of Archpriests imposing limitations on the prince’s newly introduced policies, the prince’s path is more than difficult. During the course of the narrative, Ramses grows into a multidimensional character, and his relationship with Sara remains endearing. The secondary cast is equally compelling. The vivid descriptions do justice to the ancient Egyptian society’s structure, religion, architecture, and traditions, bringing it to life on the pages. Beyond the power struggle are interesting themes about personal identity, purpose, duty, responsibility, courage, loyalty, racial and class bigotry, political power play, and the complicated confrontations between the ancient rulers and the High Council of Archpriests. The narrative is smooth and the pacing measured. Fully fleshed-out, larger-than-life characters give the book veracity. The third-person omniscient narration voice allows immersion into the complex story of how the mechanics of power play a role in deciding the fate of a nation. Despite the heavy subject matter, this is a lighthearted, fascinating, and entertaining tale of an ancient time. Fans of genre won’t want to miss this first-rate historical fiction.

The Throne of Osiris (A tale of Ancient Egypt)