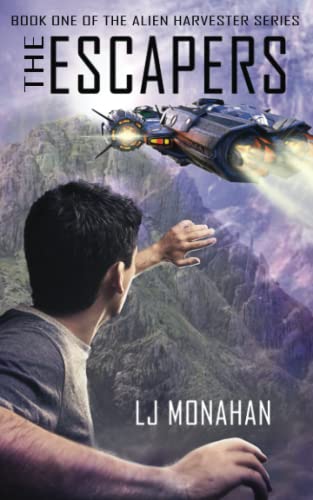 Monahan’s debut installment in the Alien Harvester series offers a fusion of apocalyptic fiction and SF, chronicling a teen’s struggle to survive after getting captured by alien invaders. Fourteen-year-old Bryce lost his parents to the alien invaders, the Imjac. He is slowly coming to terms with his loss after he moves in with his aunt, uncle, and cousin Amanda on their dairy farm. But when he gets captured by the Imjac along with Amanda and a few others, his life turns upside again. The teens are taken to a prison camp on an island hundreds of miles from the mainland to work. When Bryce discovers his gift for using alien technology, he knows he must try to escape the island. Monahan deftly weaves a deeply engrossing, intricate tale within a post-apocalyptic setting that feels thoroughly authentic. Family, friendship, and interpersonal dynamics, questions of good and evil, terrifying alien race, and moments of pure terror serve as backdrop to a growing sense of kinship between the teens, who want to escape their captors at any price. The third-person omniscient narration puts the reader inside the characters’ heads, deftly conveying their psyches with sensitivity and pathos. Bryce’s character is rounded out in a thrilling way, particularly his gift for using alien technology, leading to gripping scenes of action and tension. Amanda, with her vulnerable yet resilient personality, wins readers’ sympathies. Her bond with Bryce is tender and undeniably authentic. With a satisfying ending that packs a hefty punch, this debut installment promises an exciting series.

Book One of the Alien Harvester Series