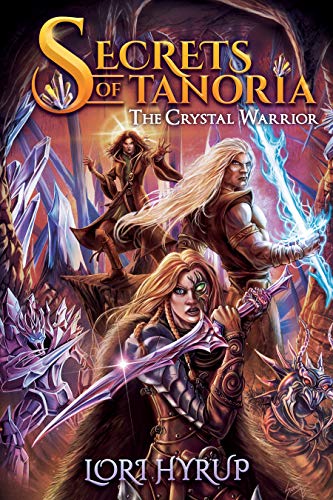 An enchanting and enthralling series opener…

Hyrup’s debut installment in The Crystal Warrior series smoothly fuses adventure fantasy, magical realism, and mythic fiction. Aria, the oldest living member of the Order of the Shard, possesses lethal sword skills and superhuman abilities to take down the deadly shard-beasts, the monsters threatening Tanoria and its people. But with the crystal embedded in her hand, the source of her power, taking over her body and threatening to eventually transform her into a shard-beast, Aria doesn’t have much time left. When her path crosses with that of two enigmatic strangers, she realizes there are secrets about her past that she has no clue about. Racing against an encroaching fate, Aria must fight the inevitable before it’s too late. Hyrup’s worldbuilding is intricate, with fresh revelations about the long-gone yesterday and the alarming secret behind the unexpected deaths of many kruusta. But it’s the people who take front and center. Hyrup’s protagonists are incredibly real people who undergo intense, sadly believable pain. Her ferocious heroine will draw readers in. Hyrup’s portrayal of Aria’s struggle with her inner turmoil, her identity as a kruusta, and her place in the world is sensitive and cleareyed. She weaves subtle, emotionally complex relationships between the main characters. Readers will be desperate to find out the truth of Kharra and Zephyron’s background while savoring the quiet moments of their interpersonal interactions. With each mystery that reveals itself, the worldbuilding grows stronger, enveloping readers in a grounded universe that feels nearly tangible. Kharra and Zephyron’s endearing bond and the well-sketched major conflict provide depth. Though a little too heavily dependent on the protagonists’ backstories, Hyrup’s patient worldbuilding and acute attention to detail help frame and thrust the elaborate plot, and her depictions of prejudice based on race, class, and physicality are thoroughly realistic with echoes in our own world. She beautifully tackles the socio-political issues while delving into subjects of questioning the past, accepting change, answering call, and exploration of the painfully intimate struggle between duty and personal desire. The character’s detailed backstories hamper the pacing to some level, but those who enjoy intricate, character-based epic fantasy will find much to enjoy here, with ferocious battles, fearsome monsters, courageous warriors, and a constant fight between the light and the darkness at its centre. Many unresolved threads are resolved, but readers seeking complete closure will have to wait, as the novel concludes with an exciting cliffhanger. A solid start to a promising series.

Secrets of Tanoria: The Crystal Warrior