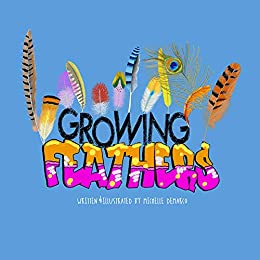 A young boy learns dreams are closer than they appear in DeMarco’s beautifully illustrated debut wordless picture book. The story unfolds entirely through the splendid digital illustrations. Using a palette of yellows, blues, reds, and greens against a plain white background, the illustrations track the little boy as he traverses a consistently bland landscape, progressing unflaggingly from street to street while feathers of all colors drift downward. On the surface, the boy’s outing through his Brooklyn neighborhood is ordinary: he is on his skateboards as he passes through the changing scenes. But there is much to observe on the way, with DeMarco making the endeavor an exercise in spotting both the action and the allusions. Most obvious, besides all sorts of streets, shops, and trade signs, are the carousels of an amusement park. Eventually, the feathers strung together on a stick light up the bland landscape, presenting everything in a new light. The story is simple enough so that readers can draw out their own narrative. Stunning in its simplicity, the book beautifully celebrates diversity, imagination, and creativity.