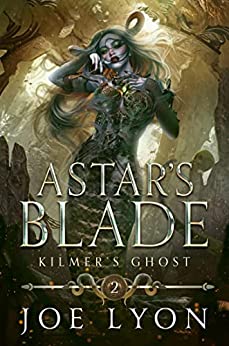 A dark, intricate, and emotionally charged novel that will grip readers and leave them asking for more…

Lyon’s this installment of the Aster’s Blade series begins five years after the surrender of the Amalgamates to King Leopold. During his childhood, the ghost Hollow Face’s repeated appearance has always scared Kilmer. But now, with Kilmer in his prime, the duo has formed an unlikely otherworldly friendship. When Yori, the king’s lead archer, goes missing in the infamous Sanguine Forest, Kilmer is assigned to look for the young man. Accompanied by a team of six warriors, Kilmer begins his mission, unaware of the great evil that has overtaken the forest. Lyon effortlessly tells a compelling story while raising questions about duty, resilience, strength, revenge, redemption, and what it means to be living with the acute trauma of loss. The alternating third-person narratives and interspersed flashbacks of the past keep readers close to the action. The spooky element of the narrative is compounded by the eerie Sanguine Forest setting, with its sense of horrors hidden in plain sight. Kilmer’s complicated relationship with the Hollow Face adds to the intrigue while the quirky old-fashioned narrative, with its fairy-tale quality fuels the tale’s compulsive readability. Lyon’s characters are vivid and rich, and the plot thoroughly grips as it builds toward a dramatic climax. Fast-paced and both character and plot-driven, the story fluidly veers into fantasy horror territory with plenty of darkness and scares. With its fascinating worldbuilding, deep characterization, and a page-turner of a plot, this is a book epic fantasy fans won’t want to miss.