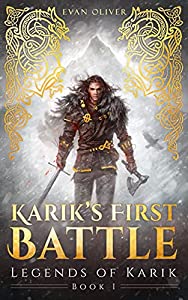 Oliver skillfully builds a fast-paced YA fantasy both around the battle between good and evil and his protagonist’s struggles to survive in the face of tormenting circumstances in his gripping series kicker in The Legends of Karik series. Karik is sick of watching his village dying of starvation and harsh winters. When his younger brother dies, Karik knows he must do something to save his village from devastation. As a part of the group leaving the village for a year to look for food and work outside, Karik stumbles upon a tiny settlement. Glad to find shelter for winter, Karik and his team soon realize things are not as they seem on the surface. Karik, whom Oliver burdens with a terrible dilemma, is heartbreakingly real. Oliver makes Ylmi’s strong mindedness and the sense of justice palpable. Karik and his friends’ sound alliance and perilous quest to eliminate the foreboding enemy keep the pages turning. The dragon, though stays in shadows mostly, is an intimidating character. Surprising revelations keep matters moving briskly throughout, and the skillfully drawn fantasy world (with its tinge of medieval landscape) adds to the intrigue. Oliver does an excellent job of propelling the boys’ story along as they unravel the village’s dark dealings with the dragon while simultaneously exploring the backstory of the legends of Vranr. Entertaining storytelling, expert pacing and plotting, and frenzied battle scenes keep the reader invested. Upper middle graders and early YA fans won’t be able to put down this gripping tale of good versus evil.

(The Legends of Karik Book 1)