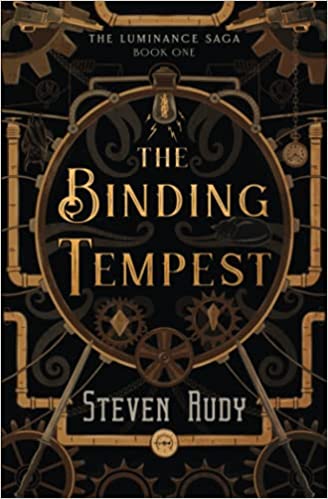 Rudy makes good use of elements borrowed from both classic high fantasy and steampunk fiction in his spectacular series kicker in The Luminance Saga. It’s been forty years since Ellaria fought in the Great War and helped build the Coalition of Nations. But a new Sagean emperor has overtaken the Coalition, threatening to take away the freedom of Territhmina. Desperate, Ellaria turns to her old partners scattered across the land. The aging veterans accompanied by a band of young allies set on to protect the failing republic. And their only hope lies buried with the mysteries of the past and an ancient relic called the Tempest Stone. The narrative spins out into numerous story lines, switching between the perspectives of a large cast of thoroughly developed characters, including the average humans, powerful luminary with the power to control energy, and sinister dark forces seeking to rule the empire. Ellaria struggles to protect what’s left of the Coalition of Nations she helped build ages ago. Kovan and Qudin, enigmatic and powerful war heroes, are dealing with the demons of their past. Learn, grieving his father’s unexplained death, tries to find answers to what happened. Wade and Tali, merely trudging through life, looking for a bigger purpose. As these characters’ paths slowly converge, Rudy plunges readers into a layered world of magic, alchemy, and ancient mysteries. Though the righteous, determined Ellaria steals the show, the rest of the cast hold their own. By throwing his motley crew of characters into a deadly quest and moving each one’s story along, Rudy keeps the reader invested. The premise is promising, and the crystal-based magic system makes for a fascinating concept. Rudy develops his fantasy world with a keen understanding of archetypal human concerns such as loyalty, duty, responsibility, sacrifice, revenge, friendship, honor, and loyalty.  perfect for sophisticated fantasy readers.  Bolstered by vivid, brilliant descriptions, Rudy’s high-intensity storytelling shines, and the assured, intelligent prose allow readers to stay invested. The expert combination of immersive storytelling, strong characters, and well-woven mixture of speculative and steampunk elements makes for an unforgettable experience. However, this is not an escapist novel: readers hoping for a fast-paced, formulaic read should look elsewhere. There is a slow, exposition-laden buildup, with the main storyline developing gradually on a classic high fantasy framework of black-and-white morality and magic and alchemy. Fans of intricately crafted, sophisticated high fantasy won’t want to miss this.