Home › YA › Temple of Eternity by R. Scott Boyer 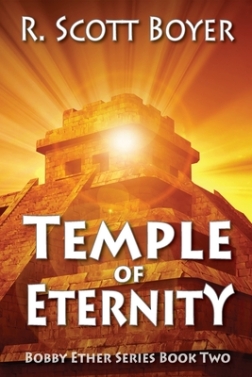 Fast-paced and a wholly imaginative romp…

In a terrific sequel to the Bobby Ether series, Boyer pits Bobby and Jinx against a pantheon of ruthless mercenaries intent on unlocking the mysteries of the legendary Fountain of Youth for their own ulterior motives. Bobby is back home from the Jade Academy after his near-death escape. But when the news of a group of missing children taken to La Muerte Verde, a secret location in the heart of a deadly rainforest in Guatemala, reaches him, Bobby and his cousin Jinx leaves for Guatemala and find themselves drawn into the complex vortex of the mythical secret of the Legendry Fountain of Youth situated in the ancient Mayan temple deep in the rain forest. With the help of Chief and the native warrior Itzmna and his people, the teenager duo untangles an intricate web of supernatural barriers, murderous cult secrets, missing people, and mythical secrets – all the while facing a savage force of natives, murderous ghosts, killer beasts, and dangerous mercenaries. The theme is heavy on action, but Boyer keeps his characters realistic and entirely humane. Readers who have read the first installment in the series will be delighted to watch the wisecracking pair of Bobby and Jinx grow into their considerable powers since their white-knuckle adventure at the Jade Academy. Boyer perfectly captures the helplessness of the loveably simplistic Slab, making him unforgettable and creates memorable characters for a myriad of supernatural and beastly creatures, including the torturous spirits trapped in eternity, the vengeful ghost of Ek Chuaj, and the intimidating Anaconda. He manages nearly-nonstop action and a complicated plot without losing narrative force. The backstory of Lingya, Maximon, and Ek Chuaj is infused into the narrative expertly, explaining details about Lingya’s torturous existence and Ek Chuaj’s traitorous allegiance to the enemy forces. It also adds much needed depth without hampering the pace and momentum. Boyer expertly evokes the native flavor of Guatemala’s Jungles, and the warrior descents of Mayans add a dash of cultural intrigue. The skillful description of Bobby’s excursion into the ghost realm makes the whole experience utterly compelling. A heartfelt and satisfying ending suggests there are more adventures to come teenagers’ way, making readers anxious for the next installment. The reader is advised to read the series in order to get the better hang of the story. This swiftly paced adventure makes for a rollicking good read.

‹ Summer in the City by Kevin Phelps
Blockbuster by Richard H. Smith ›