Home › Paranormal/Supernatural › The Darkside of Good by Jeff Bacon

The Darkside of Good by Jeff Bacon 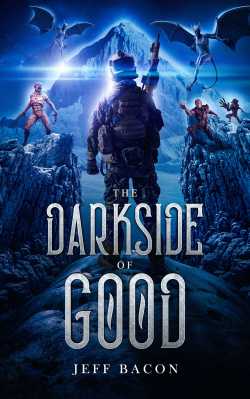 High on action and suspense… A gritty supernatural thriller!

The volatile supernatural world of angels and demons fighting for control proves an impressive setting for a story that’s high on suspense and tremendous action in this first installment in the supernatural thriller series by Bacon. When Jacob took command of his army unit to accompany a group of scientists from Baghdad and see them safely to the base at Antarctica, he barely had any idea about the horrendous ramifications that awaited him and his men. After becoming a victim of magical artifacts and demonic possessions, he not only loses his sanity but also his entire platoon. As he is shown door out of the military, Jacob finds himself agreeing to work as a special assassin for the church. In the war between angels and demons, Jacob soon becomes a pawn. Now it’s up to him to see the reality behind people’s facades and select his path accordingly as humanity is about to fall victim to the rising evil forces. Although the story seems like a culmination of several wildly improbable events, readers will cherish the wild thrill ride along with highly efficient hero as he single-handedly tackles a wide array of seemingly unstoppable villains: despicable pedophiles, dangerous dark forces, vicious demons, and fallen angels. Bacon’s character portrayals are right on the spot as he moves from one diverse set of heroic characters to villainous another. His portrayal of his antagonists (both supernatural and other: Nimrod, Father Bill, Mark and several other) is skillfully done: they evoke fear despite staying in shadows. Jacob is an astonishingly resourceful hero, smart, stern-willed, and likable. His connection with Tanya will be worth watching in the next book in the series. Readers will hope to see more of Steve in the next installment. Steve’s conversation with Bacon (in the end) builds anticipation, making readers excited to get their hands on the next installment. Bacon’s writing is assured, the prose crisp, energizing the familiar plot that’s high on action and thrill. The suspense stays ripe throughout the narrative as anticipation keeps building with surprising twists. The narrative is swiftly paced, and the atmospheric settings do justice to the story’s mysterious, gothic undertone. The graphic scenes of tremendous violence and bloody mayhem inject elements of horror, making for a gritty supernatural thriller that’s rich on both action and suspense. Lovers of fast-paced supernatural action will be pleased.

The Darkside of Good

BookView review: The SAINT Next Door by Dan Jason

A compelling, fascinating horror… A tale that doesn’t let you go. Lunden’s immersive latest horror tale features memorable characters, taut pacing, and an intricate plot full of darkness and intrigue. Clay Finnes, the sheriff of Bulwark, Georgia, is trying to come to terms with his failed marriage and his daughter’s year-old mysterious disappearance. When an out-of-town pair of husband and wife get in a vehicle accident, Clay takes it as a routine case....
Surprising and emotionally tense… A pulsating thrilling story. A haunted Long Island mansion becomes a swirling kaleidoscope of long-buried secrets, betrayal, and lost souls in Cash’s deeply engrossing second novel. It’s been only a few days since Paul Russo has lost his wife to cancer, and he knows his life will never be the same again. But when his work takes him to an old haunted mansion on the north shore of Long Island, Paul finds his fate intertwined with the place....
Cash proves himself to be a gifted storyteller who makes it thrillingly easy for readers to fall under his spell as he weaves a compelling tale of gothic horror in his latest novel. When Allison Russo, Paul Russo’s wife, dies of cancer, the latter finds his life turning upside down....
BookView Review: Bulwark by Brit Lunden