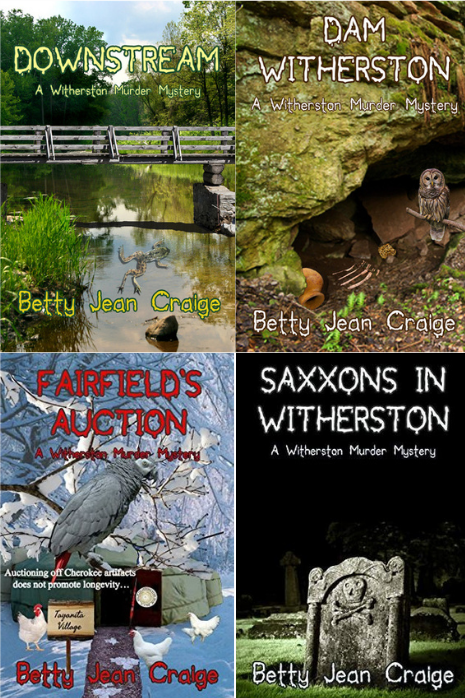 Craige, Professor Emerita of Comparative Literature, who has written books in the fields of literature, history of ideas, politics, ecology, and art, turns her talent to mystery in this charming whodunit series set in the small town of Witherston in the luscious forested hills of North Georgia. The debut installment in the series sees Francis Henry Withers, last scion of the Founding Fathers of Witherston, dead after he threatens to change his will that promised billions to 4000 residents of the town and a pharmaceutical corporation. As Detective Mev Arroyo begins to look into the suspicious death, she uncovers a dark web of secrets and conspiracy. Murder, mystery, and blackmail mark the second installment in the series. A mysterious stranger is blackmailing the mayor of Witherston and one of its prominent attorneys. When a murder occurs, Detective Mev steps in to investigate along with her twins and unravels long-buried secrets, putting all their lives in danger. The page-turning third installment sees the newly-arrived antique dealer Hempton Fairfield auctions off rare Cherokee artifacts, Appalachian antiques, and a young African Grey parrot. But when one of the buyers turns up dead, Mev must apprehend the killer before it’s too late. In the brilliant fourth installment, sins of the past come to haunt the residents of the town half a century later. Murder and mayhem follow, and it’s up to Mev and twins to solve the case. Mev, with her intelligence, efficiency, and reflective nature makes for a memorable protagonist. Her ability to look into odd situations with clarity and perception makes her all the more endearing as a detective. Her bond with Paco and twins is realistic, and her personal drama may be slight but adds to the intrigue nonetheless. The varied cast of characters include Mayor Rich Rather, Dr. Charlotte, the teenager brothers duo, Jorge and Jamie, their father, Paco, Chief Jake McCoy, Catherine Perry-Soto, and an assortment of pets, including dogs, cats, and a young African Grey parrot, Doolittle (fashioned after Craige’s own adorable African Grey Parrot, Cosmo). The town newsletter is hilarious, and the use of multiple POVs helps to keep various plot threads together. Craige’s love for the small Georgian town, her wisdom, and understanding of the human psyche shine through these pages as she delves into her characters’ tangled lives. With an uncanny ability to see their world through their eyes, she portrays their insecurities, worries, fears, pleasures, and musings while touching on the universal themes of marriage, family ties, friendship, evolving relationships, old regrets, secret desires, loss, grief, and betrayal. Along the way, she explores environmental concerns, class and race disparity against Cherokee and Appalachian populations, and radical white supremacy. Craige’s deft touch brilliantly portrays Witherston’s small-town life, making it both cozy and inviting, and with her ability to seamlessly juggle various mini plotlines, she efficiently ties all the loose ends, bringing each mystery to a satisfying close. Each book is pretty much a stand-alone, but reading the series in order will be beneficial, considering there’s a large cast of returning characters. The ongoing ups and downs of the characters’ lives, the multifaceted plot, and the way Craige’s adept storytelling effectively blends wry humor with universal concerns will keep the reader both invested and eager for the next installment. Both mystery lovers and General audiences will welcome this compelling, deeply atmospheric series.