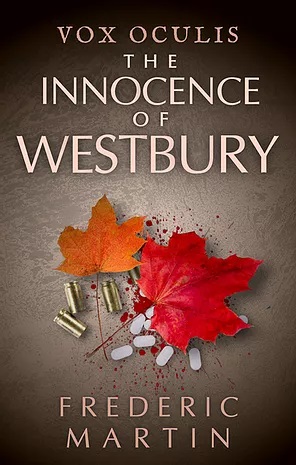 Martin’s spectacular second installment in the Vox Oculis series blends a haunting mystery with a dash of science fiction. The traumatic events of the past are far behind, and Will is healing, hoping to see life as fun and peaceful as it used to be. Blue, however is still struggling with trauma of the past and dreadful PTSD symptoms. Things seem to be improving in school with a new friend and mentor, Anna. But when the ghosts of her past resurface, threatening to destroy her present, Blue must rethink her future or risk losing not only herself but also those she loves. With lucid and limber prose, Martin delves into Blue’s thoughts as skillfully as he describes the high school setting. The pacing is swift, and the dialogue sharp and realistic. Told in third-person omniscient, the narrative draws the reader into the inner world of its protagonists, especially Blue, who struggles to keep it all together despite acute emotional pain. The bulk of the novel is about Blue’s struggles to reconstruct her life after the traumatic incidents of the past. Martin does a good job of making the happenings of her tragic past convincing. And, he is brilliant when it comes to making Blue, a brittle fourteen-year-old girl who has gone through a lot in her young life so far, into someone resilient and resourceful enough to execute her escape cleverly. Martin is so subtle at unraveling Blue’s tragic family past that readers might even begin to speculate Blue’s own part in the whole thing—until the story moves forward, revealing all sorts of secrets and hidden truths. The book is psychologically astute about PTSD, and Martin tackles the sensitive subject of PTSD in teens with great understanding, perception, and grace. —Blue’s panic and bewilderment along with her grief after her ordeal are rendered with precision. Martin’s strength is his skill to tease out the individual characters, as he effortlessly imbues the police investigation details into the affecting narrative. The tension stays high and suspense never falters as the Detective Rodney James and Chief Hannah’s investigation creates mystery around Blue’s real identity. The antagonists are thoroughly sinister, intimidating, and the justice-hungry readers will long to see the net constrict around them. The relatable high school drama and the skillfully infused science fiction elements inject intrigue into the mystery plot. With its sustained suspense, last-minute plot twist, and cliffhanger ending, this YA thriller is a winner.

The Innocence of Westbury