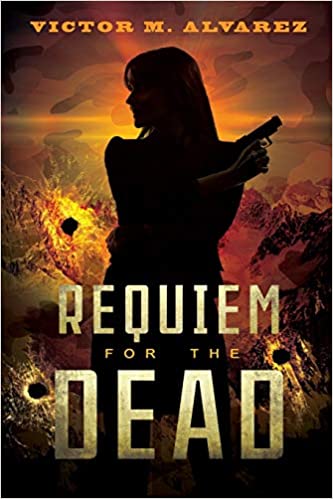 Fast-paced and electrifying, this is a surefire hit…

Alvarez’s electrifying political thriller features the appealing pair of the feisty Special Agent Jacqueline Belle Sinclair and equally capable Agent Tom Price. Agent Belle of the Army’s CID division along with Price from military intelligence is assigned to the kidnapping of Helen Chapman, the sixteen-year-old daughter of the European Command chief of staff. As the pair begin their investigation into the case, they learn that three other children of high-ranking military officials also have been kidnapped. Soon, it becomes clear that there is someone using the children as leverage on their highly-placed, important fathers. The theft of two nuclear weapons from the secure federal building raises the stake further. Also, disturbing Belle’s somber peace is a troubling attack on her father, Col. Richard Sinclair and the fact that fathers of the abducted victims seem to holding something back during their interviews. As the pair set on the trail of the kidnappers, they come across a sinister conspiracy. With the North Korean Regime and the President of the Unites States in the crosshair of the conspirators, Belle and Price must do everything in their power to uncover the plot while keeping themselves alive. Belle is a memorable heroine: she is a gutsy, intelligent, and independent powerhouse whose capacity to investigate complicated mysteries is both convincing and realistic. Price’s ambivalence about Belle adds to his appeal. The sophisticated depiction of power politics and military intelligence, owing to Alvarez’s extensive experience as a Vietnam War veteran and retired Army policeman and CID agent lends a thorough authenticity to the story. Alvarez handles his lead pair’s interactions with each other and the local officials with authority to equal his military and CID expertise. Both Price and Belle’s working-outside-the-box style approach to their job makes the reader immediately take to them, while their undeniable chemistry and gradually burgeoning relationship add to the story’s intrigue. Several shocking, believable twists put a new spin on the investigation, and a dash of romance between the pair lightens the otherwise tense mood. The main storyline of teens getting kidnapped and tortured is unrelentingly grim, and escalating body counts keep things heated. There are enough twists to this sophisticated conspiracy thriller to cause whiplash, and the ending is both surprising and satisfying. Readers will wait eagerly for Belle and Price’s future adventures. Fast-paced, intense, superbly plotted, fluidly written, and impossible to put down, this is an absolute page-turner.

Requiem for the Dead