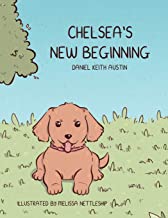 Heartfelt and genuine…  A fun-to-read.

An adorable Golden Retriever puppy gets a second chance to have a forever home in Austin’s moving series kicker. The little Golden Retriever pup is not too keen when she’s picked by a young family as a birthday present for their son. Soon, the boy’s aversion to the adorable pup sends the latter to an animal shelter. The life is ok in the shelter, but the young puppy longs for a forever home. Austin’s poignant, simple text invites readers to experience Chelsea’s emotions, both of neglect in her old home and of contentment in her new surroundings while offering valuable lesson in kindness and generosity. The assortment of various shelter animals and adopted dogs and cats, coupled with Chelsea’s puppy-temperament, make for an irresistible read-aloud. The stylish, colorful illustrations rendered in soft shades that bring effervescent energy to Chelsea’s bubbly personality, are a delight to look at. The cliffhanger ending will leave readers excited for Chelsea’s further adventures. This poignant and yet buoyant story is a must-have for beginner readers’ bookshelves.