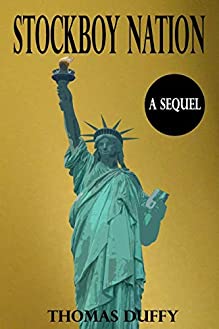 A provocative tale of intricacies of love and close relationships…

In this beautifully constructed and paced, emotionally accurate tale, Duffy explores the searing emotions of ordinary people caught in unforeseen circumstances. His protagonist is Phillip Doherty, a struggling writer in his 40s, who in his efforts to make ends meet returns to his past, hoping to gain some clarity about his future. After audiences reject his second novel, Phillip is forced to look for a job that would at least pay some of the expenses he shares with his long-time fiancée Melissa. Unable to find work, Phillip decides to go back to retail at Milton’s World of Fun, the company where he worked earlier. But when a pandemic hits the world, Phillip’s world comes crashing down. His relationship with Melissa is over, his finances are in shambles, and there’s new woman in his life who seem too good to be true. Duffy lucidly explores the complex emotional atmosphere of a middle-age couple’s relationship struggles: why people, especially in their middle age adhere to the memory of their original love and find it hard to move on. His portrayal of Phillip and Melissa’s worries, self-doubts, self-contempt, their inability to reinvest their time and energy in another relationship, and their guilt over their helplessness to get over each other. Duffy has superb ear for voices, and he sketches his characters with both skill and perception. Phillip is flawed and thoroughly humane. As he makes uncertain steps in his new life, Duffy skillfully conveys his sense of dislocation and anxiety compounded by his sense of loss of his long-term relationship with Melissa. He beautifully portrays Phillip’s increasingly conflicted feelings about LeAnn, and his ultimate sense of realization and peace. The prose is crisp, and the mundane dialogue between Phillip and Melissa, between Phillip and the co-workers he meets at work are flawlessly created. As Phillip struggles to make sense of his own place in the increasingly changing world, Duffy makes him throw in plenty of observations about both life in general and in the new pandemic-hit world. The situation about Phillip and Melissa’s financial struggles and about the job market is uncomfortably real and hard-hitting at once. Duffy’s understanding of the complex anatomy of long-term relationships, of the stark financial realities of today’s pandemic-hit world, and of the humanity’s ability to survive calamities supply this evocative novel with the clarion ring of truth.