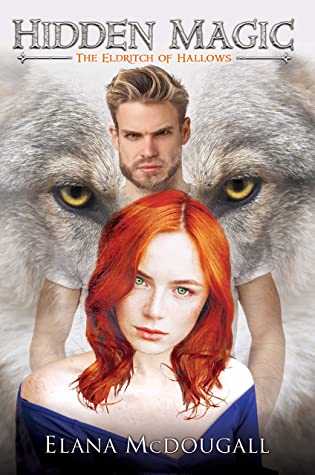 A dazzling start to a promising series…

A finely realized fantasy set in a secretive Eldritch sanctuary where magical beings fight to remain hidden from the outside world, McDougall’s debut in The Eldritch of Hallows series tells the tale of one woman’s search for truth about her own identity. Sasha’s perfect life turns upside down when her wealthy fiancé reveals his violent abusive nature. Determined to escape the damaging relationship, Sasha sets for a new place, leaving her city and old life behind. Her search leads her to Hallows, a mysterious hamlet in North Carolina. Despite her initial reservations, Sasha finds herself drawn into the mysterious lives of locals. The ruggedly handsome Sheriff Jake Wulfrick holds a strange attraction for Sasha, and there are peculiar things happening around the town. Struggling to make sense of the things, Sasha gets entangled in a sinister game of an enemy who is determined to realize their own ulterior motives. McDougall has created her magical world assiduously in which magic is real and magical creatures and artifacts abound. There is a plethora of magical creatures, including shapeshifters, faes, witches, and their powers and territories, all existing inside a social order very similar to the world of humans. Created with inventive detail, the luxurious setting dazzles. The premise is intriguing, and the conventional love story of Sasha and Jake is made more interesting by McDougall’s wit and felicitous use of language: the irresistible chemistry between the couple adds to the heat, and the love scenes are insanely intense. McDougall has a rare aptitude for building character by internal dialogue without slowing the pace. The intricate plot dazzles with its complexity and a multitude of entertaining characters who are seldom what they seem add to the intrigue. Sasha is a dauntless heroine, diffident yet plucky. Once she gets over her apprehensions, her tempestuous romance with the handsome Sheriff is great fun. Jake is absolutely charming. The secondary cast is sketched with conviction. The large cast of different magical beings at times may daunt readers, but clever dialogue, intriguing storyline, and interesting setting keep them invested. The fast-moving plot with magical spells, shapeshifting, rampages, secrets, intrigue, hidden evil, and humane magical creatures keep the reader turning pages nonstop. There’s plenty of glitter and flash, but a well-realized cast and skillfully executed plot add to the depth. The ending suggests there’ll be a lot more action in the next book. This is entirely intelligent and engaging read. Urban fantasy lovers will be greatly rewarded.

The Eldritch of Hallows