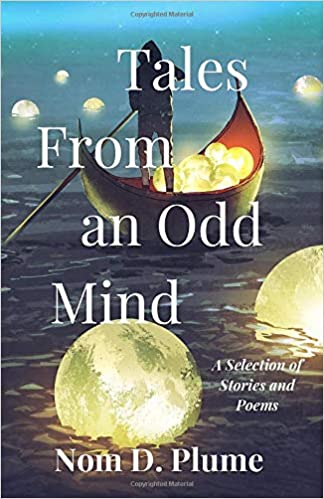 Plume’s marvelous collection of short stories and poems, a clever blend of dark humor and meditations on death and the workings of the universe, is of the sweeping epic variety despite its slender size. Often unnerving and quirky, weaving in elements of supernatural and science fiction, the collection is divided into three sections. The first section features different short stories, and each piece transcends with sentiments, imagination, and otherworldliness. The remarkable tale “Off the Map” that features a quirky explorer Samuel and two lost souls, Darren and Fleur, who follow the former because they have nowhere else to go is both tragic and unsettling. A beastly dog, a graveyard, a dead awakens to life after more than 200 years; unmistakably supernatural is in abundance in “A Black Dog, A Graveyard, And the Sea”. The elements of hard SF are in abundance in “A Warped View of the Stars,” a tragic futuristic tale of a young solider captured by the enemy forces and taken to a rouge planet with no chance of reuniting with his family and friends. The second section “We Few Old Souls” starts on a dark note as Plum introduces several quirky characters struggling with their insecurities, eccentricities, compulsions, and fears. The elements of supernatural abound. He lightens the characters’ decidedly dark situation with regular glimpses into the nitty gritty of their lives, conveying the heartwarming bond they share among themselves with skill and understanding. The reader will be blown apart by the deeply tragic culmination: Holly and Michael’s backstory and “it might have been!” (the last chapter in the second section begins with John Green Whittier’s quote: “For of all sad words of tongue or pen,/ The saddest are these: “It might have been!”) becomes a metaphor for Holly’s transition from a regular childhood to a dark adulthood. The world that Holly, Bella, Pearl, Nicolas, Rebel, and Damien occupy seems so real, and if it’s not, the reader will wish it to be real. Marked with mystery, whimsy, darkness, death, and freakish catastrophes, the collection is made even more powerful with the addition of poetry and prose which is steeped in the truths of witness and imagination in the third section: “But to write a page about “you”/ Well… who knows how much of this is really true?” writes Plume in “An Ode to Langston Hughes”. The lovers of literary fiction won’t want to miss this one.

TALES FROM AN ODD MIND