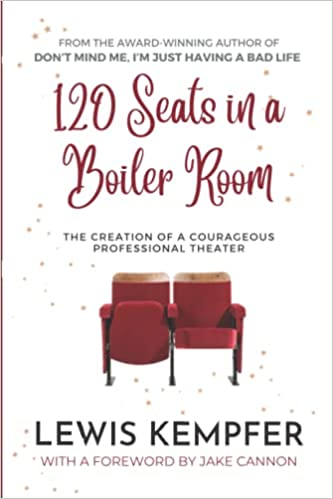 Award-winning Kempfer narrates the fascinating story of how a near-century-old boiler room building at The Factory at Franklin minutes south of Nashville became a thriving theater company in his latest book. Kempfer had teamed up with Jamey Green and another partner to create Euphoria! The Theatre in Nashville. They mounted the show in a former art gallery, but one of the partners didn’t want anything permanent. After producing the theater’s second and the last show, Kempfer, Jamey, Jamey’s brother Corbin, and their Resident Stage Manager Teressa Howell-Southworth set out to start their own company. For a permanent venue and scheduled full season, Williamson County seemed like a wonderful idea. The group soon acquired the space and started the theater. Kempfer’s story of a theater that stumbled and strived against all odds is packed with useful insights, such as facts about the work, context about casting, staffing, audience demographics and tolerance for show content, media relations among others. At the same time, he weaves in details about some of his boldest undertakings in the theater, from Man of La Mancha, How to Succeed in Business Without Really Trying, Thoroughly Modern Millie, Chicago, Gypsy, Grease, The Rocky Horror Show, and Disney’s Beauty and the Beast. Kempfer’s own stories—from securing the former boiler room at The Factory at Franklin as a venue, facing nearly insurmountable challenges in terms of renovation and finances, overcoming them, and becoming a happening cultural institution in the Nashville area—are combined with those of a dozen guest editors’ (the people who had graced its stage, ran its tech, directed its shows, and worked the box office), shedding light on how the theater impacted the local arts scene and influenced the trajectories of their careers and lives. These cameos are fun, but the most inspiring thing about this story is how four people with nothing but decades of experience not only turned a 80-year-old boiler room with a behemoth boiler filled (and sealed) with asbestos in the backstage building into a happening theater but also kept it going strong until 2014 when it lost its namesake space. Throughout, he reveals bits of himself as he discusses his personal life, his job in Disney, and the work that is important to him. Kempfer’s prose is crisp, and his engaging style makes it impossible to leave a chapter midway. With this book, Kempfer offers a well-crafted account of the history of the Boiler Room Theater from birth to final curtain call.

The Creation of a Courageous Professional Theater