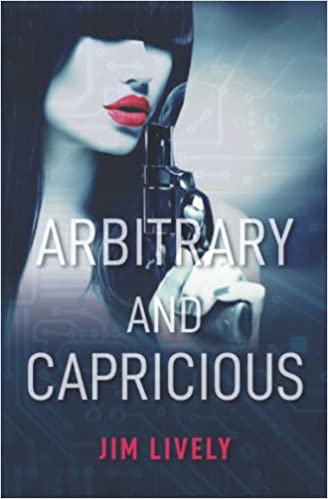 Masterfully paced with relentless twists and exhilarating thrills… A book to savor.

Full of conspiracies, kidnapping, and heart, Lively’s latest mystery doubles the trouble for retired lawyer-turned-artist Sanders Pierce. Sanders is content spending time painting at his art gallery, but when a former colleague, now general counsel at Global Data Systems, a major health benefits firm, asks him to take a temporary contract job to investigate potential internal deceptions, Sanders agrees to do the job despite his initial inhibition. A man of integrity, Sanders insists he will abide by the standard of law, which could expose the firm’s fiduciary conduct as arbitrary and capricious, and the firm seems to be ok with that. As he begins to investigate, he receives a series of anonymous tips, revealing several inconsistencies regarding the way the data is stored at the firm. The stakes rise when FBI Agent Hale contacts Sanders and warns him of serious threat to his life. But Sanders cannot sit still until he uncovers the truth, even if it means throwing himself in danger’s path once again. The story is filled with conspiracies, fraud, data breach, and a gaggle of colorful characters, including an exotic dancer at a strip club, a psychotherapist who could be a dominatrix, and a ruthless assassin, and (sort of) romantic vibes. The plotting is tight, and the narrative is riddled with twists that come at a furious pace. The third-person omniscient narrative voice skillfully provides insight into the characters’ motives as well as their shifting relationships. Sanders is as endearing as ever, and following the retired lawyer’s day-to-day routine is as engrossing as watching the delicious mystery unravel. Beyond Sanders and Claire’s retired lawyer/psychotherapist personas are two old people seeking friendship and companionship. Lively also gives dimension to the secondary characters, who don’t have much space in the story but are compelling anyways. Readers are swept along as Sanders discovers a sinister conspiracy of grievous consequences. The storyline is intriguing, and the whole thing is laced with friendliness and warmth, remarkably, considering the nefarious conspiracy at the heart of the novel. The mystery unfolds at a deliciously escalating pace, filled with believable red herrings and shocking twists, and the drama builds to an exhilarating, satisfying ending. Readers will be on the edge of their seats until the satisfying end. This clever, intelligent mystery peopled with captivating characters makes for a winner.