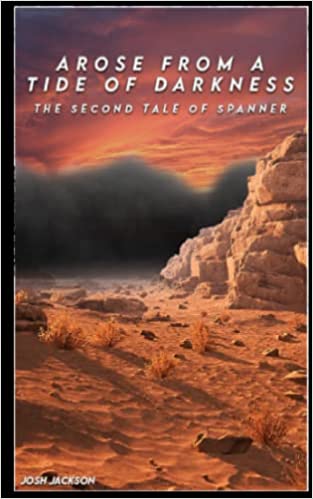 A group of unlikely heroes joins an enigmatic young emissary on a mysterious quest in Jackson’s second installment in The Tales of Spanner series. Determined to live her life on her own terms, the fiercely independent Kameey’l, a musician, sets out to begin afresh in the promised land of New Elbestran, the growing nation led by Spanner Tengande’s command. She soon makes a friend among humans, the endearing monk Lin Banita, who prefers company of non-human anyways. The fierce knight, Vargr Hearkenhil, wants nothing but peace in her land, and the cynical con man Glaine is just trying to make a living. When a twist of fate throws these ordinary people in the path of an enigmatic Molian Ch’tont elf, they realize their lives will never be the same. Over the course of the novel, Jackson tells a deeply intriguing story with high fantasy elements, populated by well-developed, multidimensional characters. The narrative is jampacked with varying species, extraordinary magic, fantastical technology, and curious places. It’s a lot to take in, especially as the group stumbles from one frantic action scene to the next. The extraordinary large cast of characters with unusual names adds further to the confusion (there’s a glossary at the end though). But Jackson pulls the reins just enough to further develop his characters, while unveiling the wider political machinations at play. He keeps his characters credibly flawed as the cold war between Spanner and the wizards intensifies. Exciting action scenes and unexpected twists add further complexity to the narrative, and the Molian Ch’tonts’ backstory intriguingly delves into the distant history. A captivating fantasy tale that will have readers eager for the next one in the series.

Arose from a Tide of Darkness

The Second Tale of Spanner