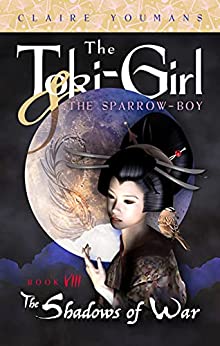 Azuki grapples with mysterious happenings, secrets, and the tumultuous meanings of what it means to stand for one’s family, friends, and nation in the eighth installment of Youmans’s addictive, layered historical fantasy series. Japan, 1877. With the Satsuma rebellion threatening to shatter the Empire’s fragile internal peace and fracture its relations with the outside world, Azuki is finding it hard to stay content. But that’s not the only problem Azuki is facing: there is something mysterious going on around her, and she has no idea who or what is behind it. With her family in danger, Azuki must do everything in her power to solve the mystery. Youmans’s premise is terrific, and the pacing glides along smoothly as Azuki sets out to find the elemental forces behind large-scale disruptions around her, worries about the rebellion threatening the country’s peace and prosperity, and ponders her own role in the bigger scheme of things. She peels back layer after layer at measured pace, with Azuki’s questions always at the forefront— With her country’s peace at risk, can she afford to abandon what she fought so hard to achieve? Can she survive the rebellion that’s shaking her nation’s very soul while trying to sort out the complications of her own life? While there are multiple subplots and love (for family, friends, nation) is a powerful motivating force all around. However, the story doesn’t limit itself to just love, instead expanding further and giving bulk to a variety of profound themes, including racial and class disparity, freedom, responsibility, duty, integrity, courage, loyalty, compassion, identity, and self-discovery. This is the eighth book in the series, and the prologue at the beginning is sufficient enough for readers jumping back into the fully realized mixture of mythological and historical past of Japan through a wide, revolving cast of intriguing characters. This volume offers more actualized characters and an intricate backstory than the earlier books, setting a more engaging pace. Youmans’s expert prose skillfully portrays Japan’s Meiji era, deft worldbuilding strengthens the story, and psychological profound motivations of various characters add to intensity and depth. The vivid illustrations compliment the narrative, and the ending wrap-up brings together major plot threats together, tying them neatly while still leaving plenty unresolved for the next one in the series. Beautifully written and carefully crafted, this engrossing historical fantasy makes for a must-read for young and older alike.

The Toki-Girl and the Sparrow-Boy, Book 8: The Shadows of War

1 thought on “The Toki-Girl and the Sparrow-Boy, Book 8: The Shadows of War by Claire Youmans”