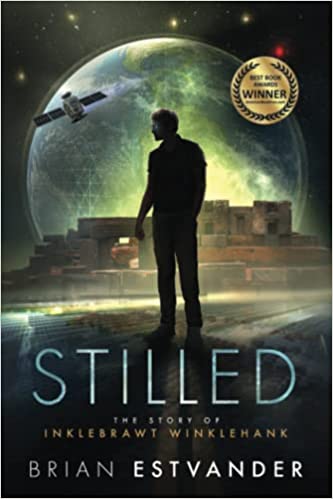 In this thrilling space opera by Estvander, an alien race with access to powerful technology threatens the future of humanity. Inklebrawt Winklehank, a Huply, a hybrid of the biologically engineered immortal Plythi’i race and a human, has always struggled to choose between his enhanced Plythi’i abilities and the wild human emotions and temperament. Maggie Henderson, a scientist working at MIT, struggles to keep her own powers hidden. David Wessel is an elite sniper stationed in Afghanistan, who is forced to pick whom to protect after a face-off with an unusually dangerous enemy. Nicola Helyn is a runaway mobster trying to forget his tortured past. Connected by fate, the four must team up if they want to safeguard the future of the human race. Descriptions of Inklebrawt’s logic and enhanced Plythi’i psychokinetic abilities are rooted in scientific intrigue. Similarly, Maggie, Nicola, and David’s powers of observation and deduction have the inevitable extraterritorial quality, giving the novel its hard SF tone. The enmity between the Plythi’i’ and the Shepherds drives the narrative. The mystery of the enigmatic Tsr’Yyd solidifies the lineup of the heroes’ allies and opponents. The narrative moves at a measured pace, with plenty of action and tension keeping the pages turning. The book’s biggest strength is the complexity of its main characters. Inklebrawt is a natural protector, equally comfortable protecting his sister from the goons and safeguarding the future of the human race from the Shepherds. His constant struggle with his intense human emotions in the face of what his logical mind knows about his otherworldly enemies, make him an authentic and believable protagonist. Maggie is sensitive and vulnerable but also deadly with her Plythi’i power. David, Nicola, Zayla, and Utyi are equally compelling. While the resolution may seem too neat for some, Estvander brings new dimensions to his Plythi’i characters—who possess both the sense and heightened psychokinetic abilities of the Plythi’i and the human temperament—weaving emotional depth and intergalactic political issues into the plot. He immerses readers in sprawling mountain plateaus and vast swaths of space travel. The narrative alternates between the present and the past timelines, unraveling the Plythi’i siblings’ backstories. As the story progresses forward, several subplots merge together to tie up all the loose ends, forming a logical whole. Throughout, Estvander delves into themes of family, sibling love, friendship, integrity, duty, responsibility, regret, and redemption. Readers of hard SF and space operas will each find something to draw them in.