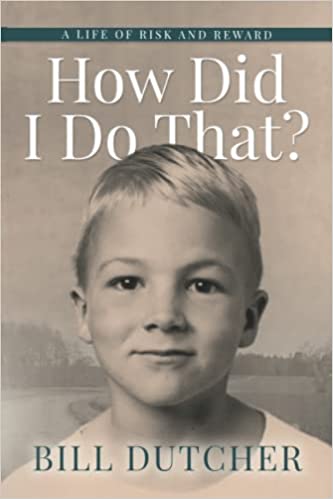 Dutcher, the founder and chairman of Anadarko Minerals, Inc., an Oklahoma City independent oil and gas producing company and author of two books, chronicles his journey of surviving a turbulent boyhood and turning a journalism degree and a $500 investment into a thriving, family-owned oil and gas producing company in this poignant and sometimes humorous memoir. Born during World War II to an Oklahoma-based oil company chemist father and a creative housewife mother, Dutcher, with his energy and keenness, became a minor neighborhood menace. His job as a paperboy taught him responsibility. By high school, Dutcher had become an honor student. He went on to join the University of Oklahoma’s School of Journalism and was a walk-on to freshman basketball. After graduating with honors, he married the love of his life and began working as a newspaper journalist. A job in public relations at the University followed, and then after four years of service in the Navy in the Philippines and the Pentagon, he moved back to Oklahoma with his family. There, he tried his hands at various jobs, including a speech writer, a Washington lobbyist, CFO for a company among others. Eventually, he founded his own oil and gas company and started a real estate development company. Throughout, Dutcher’s love for basketball remains intact. He enjoyed a lifetime of playing basketball and competing against players ranging from Globetrotter Marques Haynes in the early 1960s to current NBA stars Kevin Durant and Trae Young. Several injuries, such as a severed ALC in right knee, broken fingers, a detached ligament in left bicep, detached retina, and a serious heart condition didn’t deter Dutcher from pursuing his hobby which continued well into his seventies and included 24 fantasy camps and seven OU Varsity Alumni games. Fluidly written and brilliantly conceived, the book is as much a celebration of hard work, determination, strong will, and resilience as it is a poignant exploration of family, friendship, loss, grief, pain, and mortality. Dutcher’s prose is crisp, narrative flows smoothly, and his storytelling is entertaining. A heap of colored photographs complements the narrative. What is most impressive about Dutcher’s journey is the way he faced the lows of his life, including financial setbacks, health scares, and loss of his loved ones. The book allows the reader to bear the courage and resilience of a man who knows how to live life to the fullest. A stunner.

How Did I Do That?: A Life of Risk and Reward