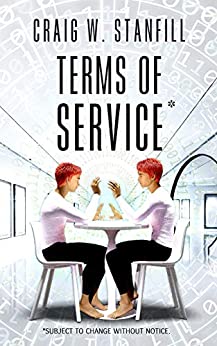 Stanfill beautifully weaves the richness of human complexity into this thought-provoking tale of science fiction, the first in the Terms of Service series. The world is controlled by big corporations, with every aspect of people’s lives monitored and regulated by AI. The slightly rebellious Kim is almost content in her mid-level job at the AI Company. Her personal life is dreary, and mandatory childhood separation from her birth mother has left her struggling with grief and trauma. But when Shan, Kim’s childhood friend, comes back into her life, she realizes she hasn’t lived her life at all. But freedom comes at a cost. The story is played out against the backdrop of an utterly ascetic world, a world ruled by self-serving corporations, which control every aspect of human life by exploiting AI, a world in which individual voice, freedom of thinking and choice do not mean anything. The richly layered narrative offers a keen-eyed portrait of life in the chilling dystopian world, its citizens living under a regime so evil that parents trying to keep their children with them are condemned as dangerous criminals and subjected to severe punishment. Stanfill’s storytelling is straightforward, describing how Kim views her AI-controlled life merely as tedious in the beginning, but begins to see everything in new light after Shan came back in her life, realizing what it means to have her own voice. And though it’s a story about misuse of technology and what it means to lose one’s freedom of expression, thought, and action, love stays at the heart of the story: the novel explores how falling in love changes a person’s perspective not only about themselves but also about the world around them. An unsettling anticipation permeates the plot while simple, straightforward prose and measured pacing draw readers along smoothly. Stanfill’s interpretation of the exploitation of artificial intelligence at the hands of governments and businesses is uncomfortably real. Through Kim’s story, Stanfill subtly asks readers to think critically about freedom of thought and action as advanced technology takes more and more control of our everyday life. As Stanfill writes in the epilogue, “Haha! Fooled you. You thought this was a work of fiction set in the future. That notion is the lie of the best sort: it is half of the truth.” Absorbing and accessible, this thought-provoking tale will leave readers thinking for long.

Subject to change without notice