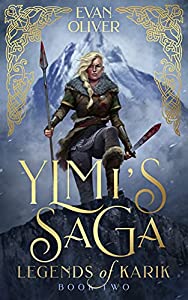 A vivid blend of high action and poignant emotions…

Oliver continues his immersive The Legendes of Karik series with this fast-paced installment. Ylmi Bodvarsdottir has grown up in the harsh mountains beyond the protection of her village. But it’s not the unforgiving terrain that poses a problem for Ylmi: the Jarl of the settlement is a selfish, greedy man who would go to any length to realize his own sinister motives. And though Ylmi and her dragonslayer friends have defeated the dragon, Jarl has no intention to acknowledge their victory. But when greed and power struggle put various rulers against each other, Ylmi and her friends must decide whose side they want to take. Oliver infuses his narrative with substantial characterization along with his characters’ serious moral dilemmas. He does an excellent job of exploring Ylmi’s inner turmoil, who is torn between following her heart’s desire and being there for her family; her journey is complicated further by Karik’s arrival. Karik’s quick-witted resiliency in the face of utterly harsh circumstances makes him a highly likable hero, and his fierce determination to realize his mission is portrayed with credibility. The secondary cast is equally compelling. The emotions are poignant, and the frenzied battle scenes breath realism. Oliver takes his time to build Ylmi’s backstory, which hampers the flow of the narrative in the beginning. But once the real action begins, he regularly squeezes in the tension, making it an exhilarating read. Oliver’s crisp prose, fast-paced narrative, and excellent plotting means the story never loses its momentum. This is a solid adventure that’s sure to satisfy fans of YA fantasy. A must-read.

(The Legends of Karik Book 2)