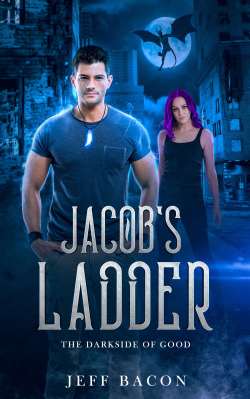 A gripping tale of bizarre and fantastic…

Jacob Baccus returns once again in Bacon’s fantastic second installment in the Darkside of Good series that aptly blends supernatural fantasy with Christian mythology and modern technology. Someone is controlling minds of common people with an ancient drug, making them mindless slaves. When Jacob recognizes the handiwork of one of his old nemesis, he believes the key to disengage the mind-control powers of the drug lies in elimination of the villain, but there’s another enemy, who is more powerful and impossible to kill. Although Jacob is granted special powers and extra strength, the struggles with his anger issues are standing in the way of his fighting the enemies with a controlled precision. Complicating matters are the traumatic childhood memories that are weighing heavily on Jacob’s mind and the members of his extended family, an ancient cult, who want him dead at any cost. While the first installment portrays Jacob mostly as a superhero, the reader will see more of his humane side in this installment. Bacon daftly shifts the focus away from mystery and action to Jacob’s personal relationships and traumatic childhood without losing a beat, adding weight to Jacob’s character as the protagonist of the series and illuminates the difficulties of Jacob’s life as the chosen one as his struggles with his anger issues put him in harm’s way more than once. Jacob’s interactions with his enemies are fraught with both tension and humor. A cast of unusual secondary characters—among them Witches, Giants, Vampires, and Shadow People, who are by turns intriguing and humorous—add color and complexity while angles, demons, hybrids, and other supernatural entities make their presence known. Some old characters return with more weight to their persona: Lucifer, despite having a dark shade to his personality brings a refreshing cheeriness to the story. The dialogue laced with wicked wit is razor sharp, the narrative swift, and the prose engaging. The interview with Tanya (in the end) will leave readers eager for the next installment. Whereas the first installment is all about action and darkness, Jacob’s Ladder reads better with its heavy dose of humor, sophisticated action, high intrigue, sharply defined characters, and hefty emotional quotient. Readers who loved the first book in the series will find this one even more engaging. Bacon has delivered a sleek, hard-boiled page-turner. The lovers of action-packed urban fantasy are in for a treat.

The Darkside of Good: Jacob’s Ladder

(The Darkside of Good Series: Book 2)