The Chaos Trilogy By Jim Hamilton 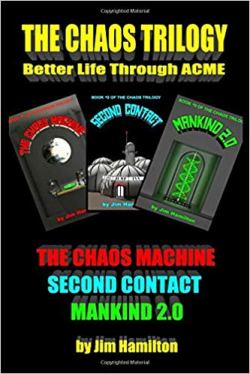 In The Chaos Trilogy, Jim Hamilton delivers a brilliant story that brims with exotic milieus, alien superpowers, and humane protagonists…

Elements of interstellar cruising, alien conveyance, and multiverse exploration make The Chaos Trilogy a demanding, but rewarding read. The first installment of The Chaos Trilogy builds the series foundation for upcoming engrossing, satisfying two more installments. In The Chaos Machine, the six-member crew of a Shoormaran freighter, an alien cargo ship, gets stranded on Earth after a bad jump. It is 5342 BC and knowing there’s no way of getting back to Shoormaran, the crew decides to help the human population which is destined to perish in next thousand years. After meeting success initially, their efforts are about to go in vain as an inevitable phenomenon brings the end less than a year away. It’s up to humans now to save the solar system from annihilation. Multiple POVs and flashbacks contribute to a multidimensional, altering portrait of Earth over the period of thousands of years. The pacing of the book is slow, but with numerous plot lines over a different period and place and plenty of techno details, the reader will be better off to move slowly so as not to miss any of the more subtle happenings or psychological observations. In Second Contact, the sequel to The Chaos Machine, determined and sharp 19-year-old Cassiopeia’s efforts make a way for the human race to join the Alliance. It’s disconcerting to see the human race dependent on the intelligence of the Shoormaran crew for technology advancement in The Chaos Machine, but Second Contact recognizes humans’ superior intelligence over others. Friendship between freighter crew and humans forms the foundation of an endearing relationship between humans and inhabitants of ancient Shoormaran Empire. In Mankind 2.0, the third installment in the series, Hamilton impeccably mixes together several unwieldy plot lines and ties the storylines from the first two books together as many of the characters from the first book return in the installment. Hamilton’s effortless depiction of significant environmental disasters with appalling ramifications for the human race in the far-future is too real for comfort. The series is heavy on technical mumbo jumbo, which makes it more appealing to fans of hard-core science fiction. A fusion of advanced techno details and delightful moments of character interaction, this sci-fi adventure is sure to delight all sci-fi enthusiasts.