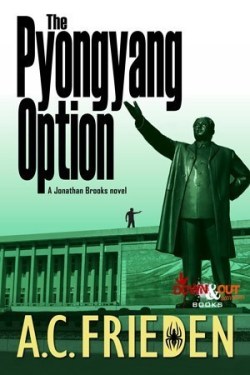 Compulsive and complex… an addictive read…

With recent developments in USA-North Korea relations, this latest techno-thriller by A. C, Frieden is hardly far off the mark. In this third installment in Jonathan Brookes series, Jonathan must use every resource available in an attempt to save his ex wife and make it out alive of Pyongyang, Capital of North Korea. After Hurricane Katrina leaves New Orleans attorney Jonathan Brooks’ office space in shambles, he is forced to handle a murky business deal in Ukraine on behalf of a client. After arriving in Ukraine, he learns his client’s top executive has vanished. The search for the executive takes Jonathan on a dangerous journey in the notorious streets of Kyiv. But things take a turn for worse from there. Jonathan’s ex wife Linda, the ambitious journalist, unknowingly falls victim to a political conspiracy after landing in North Korea for a media gig. To save Linda, Jonathan decides to go to Pyongyang. But to escape unscathed from the capital is entirely another matter: Jonathan must fight dangerous political enemies and groups of assassins, spies, and hackers. The plot is highly complex with several parts set in different locations around the globe, but Frieden spins his subplots with the easy assurance of a veteran author. To keep the story move fast, Frieden relies on a mixture of technology, diplomacy, and espionage and relays a well-researched information about diplomatic relations between countries, working of government bodies, and advanced intelligence techniques. The characters are well drawn, and Frieden’s storytelling has a political edge to it: Frieden doesn’t mention the current American president’s name, but he talks about the president’s nonchalant attitude toward matters of a delicate nature; there’s also mention of North Korean leaders and the recent development in historic nuclear disarmament talks. The book is a classic spy novel with the major focus on high stakes assassinations, political dealings, and spying. While the denouement dilutes readers’ earlier high-intensity reading experience with its lack of necessary action with things falling in place too easily for the protagonist, the book is definitely a page-turner with its interesting premise, expertly paced narrative and high-action plot. Although there are a few spoilers in the book from the earlier installments in the series, it is good to read as a standalone novel. Frieden captures readers’ interest from the very first chapter and keeps them glued until the final page.